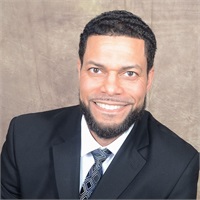 Harry was born in Greensboro, NC, and graduated from Walter Hines Page High School. He received a basketball scholarship at Francis Marion University, where he received a B.S. in Biology and a minor in Chemistry. After graduating from FMU, Harry played professional basketball overseas in different countries for 6 years. He played in Canada, Spain, Portugal, Holland, Mexico, S. Korea, and Qatar, where he assumed a leadership role on each team.

After playing professional basketball, Harry excelled in the Store Manager role in the retail industry for 9 years. While working full-time as a Store Manager, he obtained a master’s degree in Healthcare Administration and accepted invitation to the Alpha Beta Kappa Honor Society with a 3.5 GPA. In 2015, he began his career in the Financial Services industry with Mass Mutual. The financial knowledge he learned from the leadership at the local office was always something he wanted to know during his days as a professional basketball player. Entering the arena as a Federal Benefits Counselor in 2016, Harry would continue to share this financial knowledge to assist each of his clients. His clients range from professional doctors to lawyers and various Small Business Owners, to nurses and social workers. He’s even beginning to work with some professional athletes.